Can't find what you're looking for?

Girls football - The Year 5/6 girls football team travelled to Street to take part in the County finals. The children represented Trinity brilliantly. They came top of their group, winning or drawing all their games. They were then through to the Semi finals where they lost 1-0 in the last few minutes, a very close game! Well done girls for your positive attitude and determination!

November 2021 - Year 5 and 6 Girls and Boys football - well done to all the children that took part. Congratulations to the girls team who came runners up and are through to the County finals!

Each class had a country that they represented during sports week. They also researched an Olympian from that country. On their sports afternoon, the children took part in races (competing for their house group) as well as range of different sport activities.

Overall the results were:

Well done to all the children (and staff) that took part! Please see below and on class pages for some photos of the week! A special well done that still took part in sports week, whilst isolating!

Sport Relief 2020 - We came to school in our sports clothes and every class ran a mile - that is 10 times around the race track!! We raised money for Sports Relief.

At Trinity, we aim for every child to take part in a sporting event or wider activity during their time. Trinity attend a range of sporting events, some of these being competitive and some being inclusive, where the children have the chance to learn a new skill or have a go at something they are not very confident with. We attend events at Gordano where we compete against other local schools and also North Somerset events where we compete with different schools in North Somerset.

Sport reports and photos of the events that we attend will be added below.

Twelve year 4 children took part in a multi-skills festival at Hutton Moor, where they learnt some new skills and games. During the afternoon, the children took part in two workshops. The children were given the opportunity to try plastic sword fencing, laser shooting and Pentactive activity on rotation. They also took part in a multi skills cricket festival, run by the Somerset Cricket Board. The children really enjoyed learning the new activities and showed eagerness and determination as they approached each activity.

The children have been practising their running skills during Future Stars PE over the last few weeks. Forty children across KS2 were selected to go to Gordano to compete against the other Portishead schools. The children showed courage, determination and perseverance during the afternoon. Years 4-6 then went to compete against other North Somerset schools at Bristol Grammar School sports fields and worked hard to beat their personal best. Well done to all the runners!

Trinity took a girls' and boys' football team to Gordano to compete in a tournament of matches against other Portishead schools. Both teams showed great teamwork as they passed each other the ball and showed respect to the other teams. The boys' team showed determination and resilience as they played their games. The girls' team worked together extremely well and won all their games meaning they earned the right to qualify to the next round. The girls' team will be playing next term at the BGS sports ground against other qualifying North Somerset schools. Well done to both teams!

The children that attend Tag rugby club after school took part in a tag rugby festival at Gordano school. They played against lots of other Portishead schools and showed off what they have learnt by winning all of their games. Well done to them!

On Friday nine year 5 and 6s attended the North Somerset Primary Girls' Football Finals at Bristol Grammar School. We were in a group with All Saints and Worle Village. In our first match we drew nil-nil with Worle Village who went on to beat All Saints 1-0, this meant that we needed to beat All Saints by 2 goals to top the group…..and thanks to 2 goals from Immy we won 2-0 and topped the group! We then went into another pool with the original group winners. In our first game we beat a very strong Mary Elton team 1-0 with Martha scoring a last-minute winner. In the second game we convincingly beat St Josephs 2-0 with Martha again bagging both goals. This means we progress to the Somerset Finals in January. Well done girls – what a brilliant achievement and great teamwork! The standard was very high but the girls didn’t let it phase them and represented Trinity brilliantly.

A group of Year 4 and 5 children attended a Kurling and speed stacking sporting event at Gordano. They said “Kurling is such an exciting sport. You have to be precise and calm to get it as close to the middle as possible. It is a lot of fun and we got really competitive. On the other side of the hall we practiced cup stacking, which is harder than it sounds. At the start we had three cups and using both your hands you needed to stack them as fast as possible to a pyramid. Then you stacked them back up. We timed ourselves doing 9 cups, which was really exciting. The fastest one did it in under 5 seconds!!” Overall, it was a brilliant day and the children learnt lots of new skills – Well done to them! 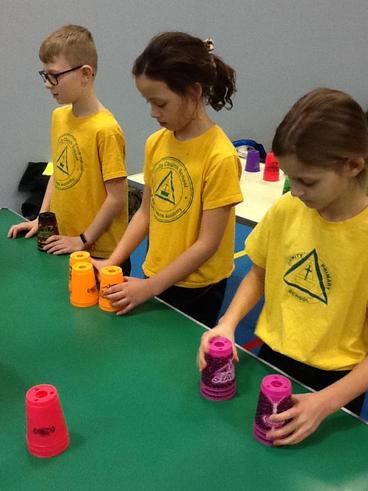 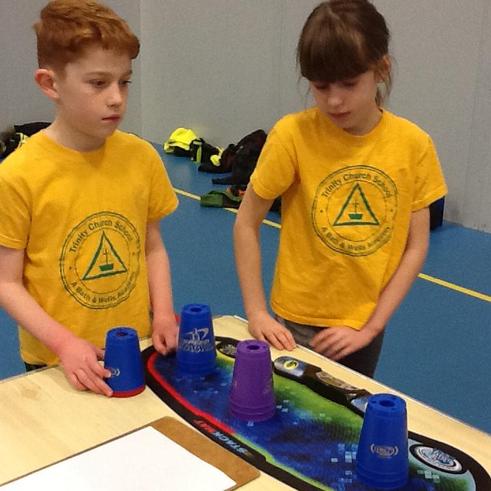 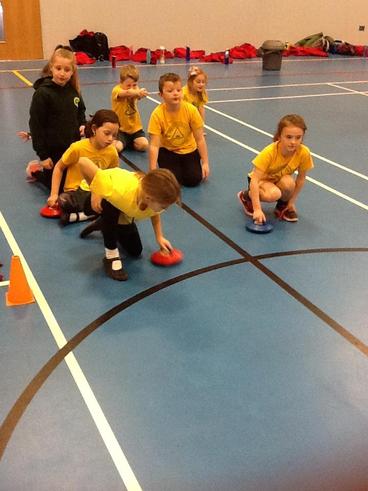 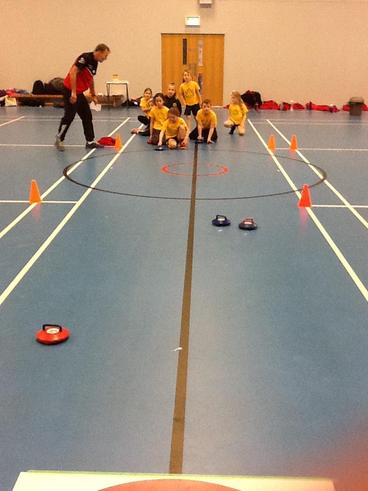 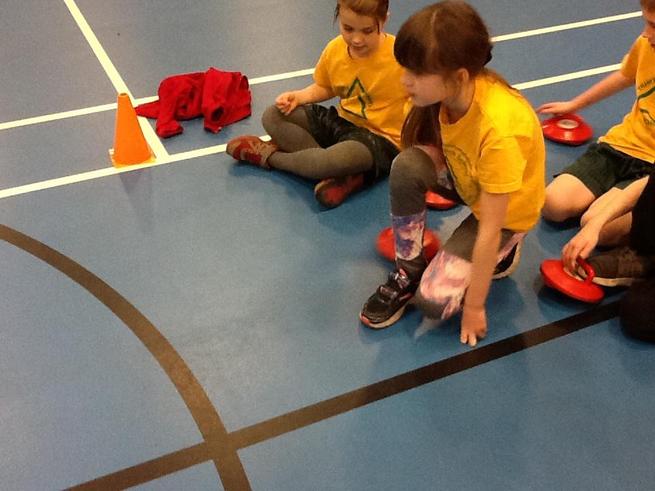 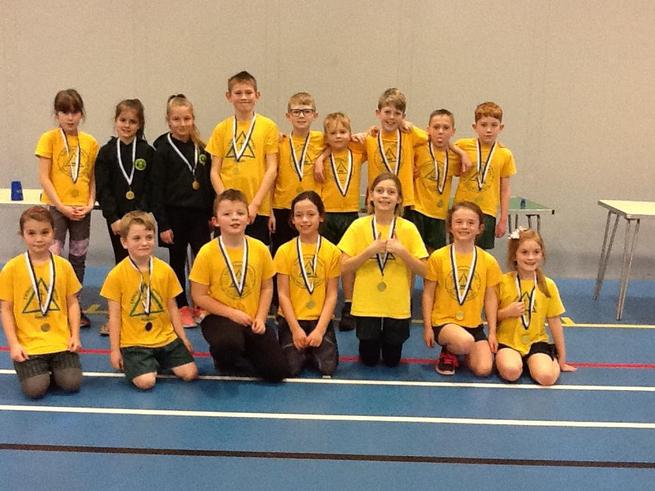 Our Y5/6 girls football team went to Weston College to compete in the County finals against other football teams from across Somerset. They played in a pool against 5 other teams and there were some very close matches.  They won their first match and lost their next two but went out with determination and won their last two games. They went through to the semi final on points and goal difference - it was a very close tournament! The semi final was played in very wet, cold conditions, they were the first to score but the match ended in a draw 1-1 and went to penalties!  Trinity's goalkeeper saved all the penalties so they went through to the final against Yeovil. The girls showed great resilience after a long day and in cold, wet conditions but played their best game and won the final 3-1.The girls will now go on to play in the next tournament against the winners of Devon & Cornwall later this term. The girls showed brilliant teamwork, rowing together and perseverance throughout the day. They were resilient when they didn't win and kept on going and it paid off. They had courage to keep going and remained hopeful throughout the day. Well done girls - what a brilliant achievement and we are very proud of you all! 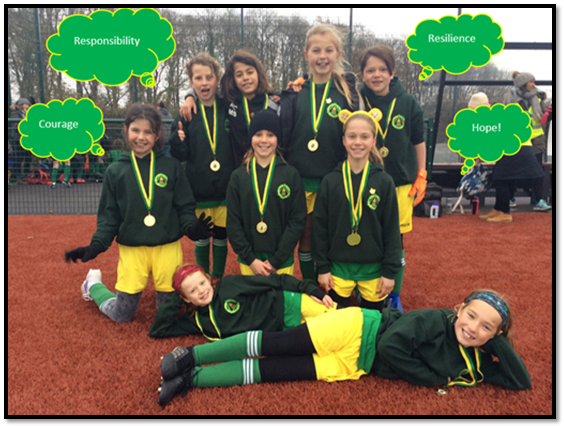 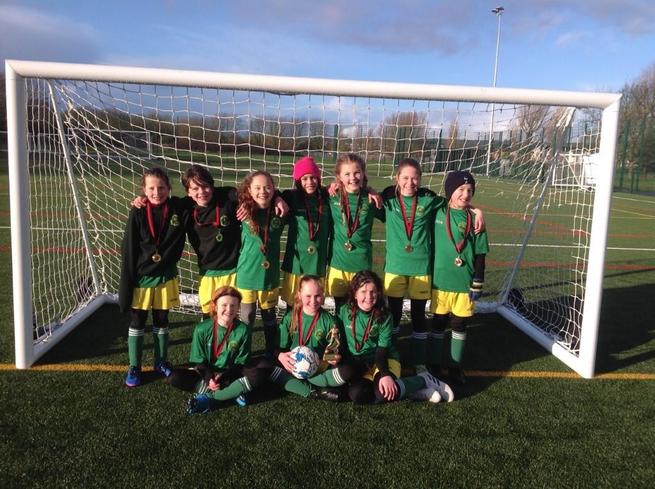 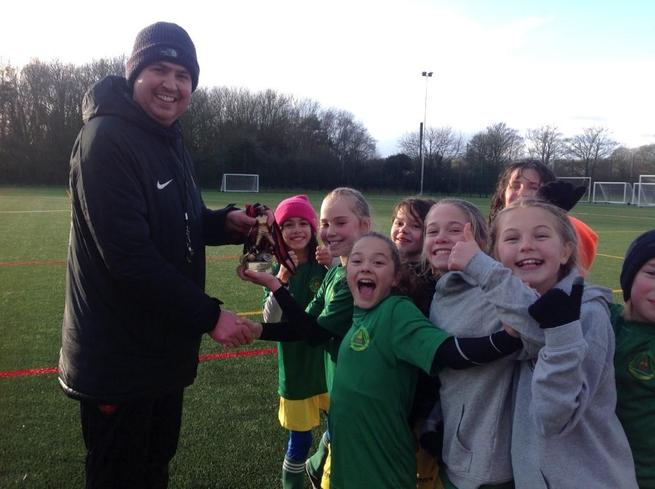 Eight Year 2 children went to St Katherines to take part in a Cricket festival. The children went around the hall and took part in all the activities showing courage and resilience as they tried new skills. Thy practised throwing and catching, aiming for a target which was the cricket stumps, practised their over arm throw and used a bat to hit the ball. All the children were determined and willing to take part in all the activities. The St Katherine’s students were particularly impressed by Trinity’s accurate catching. The eight children then came back to school and showed brilliant leadership skills as they helped set up, deliver and teach the rest of the Year 2 children the activities. Well done to them! 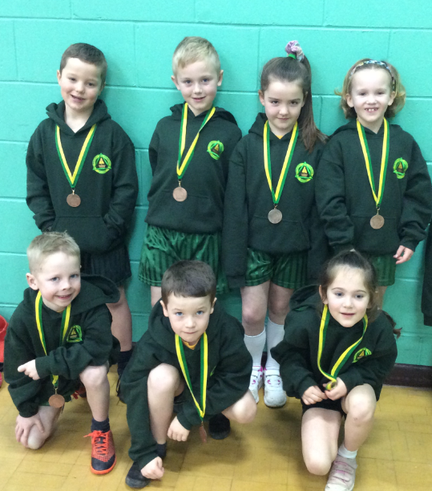 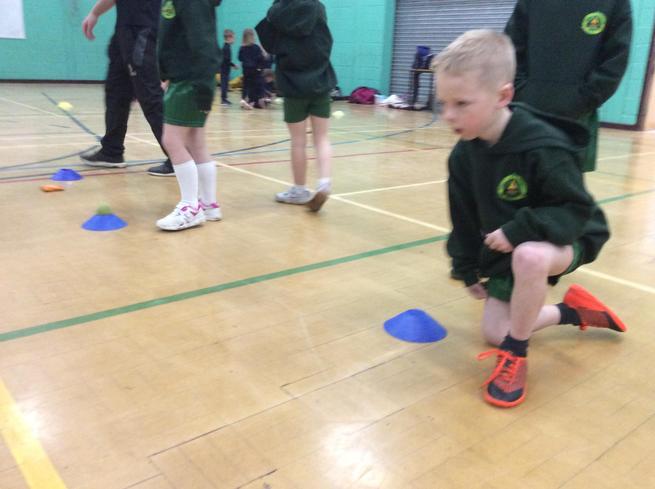 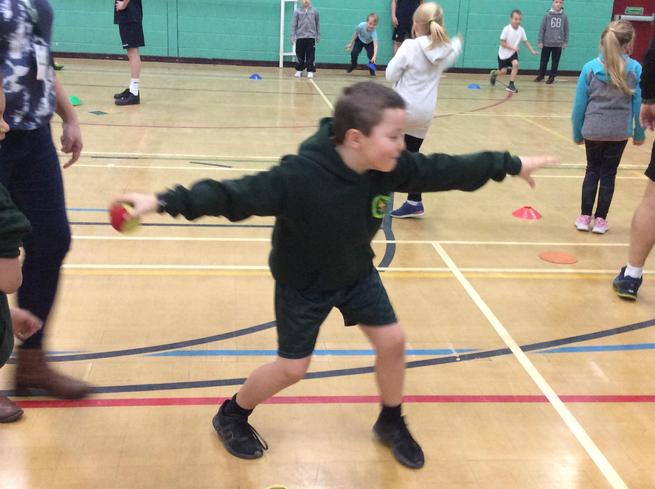 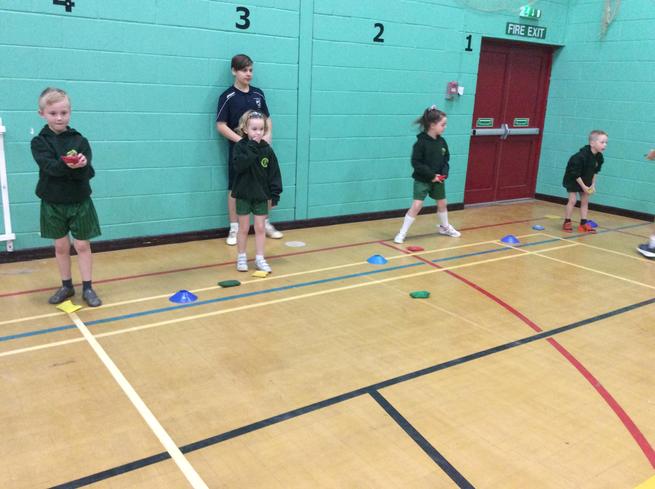 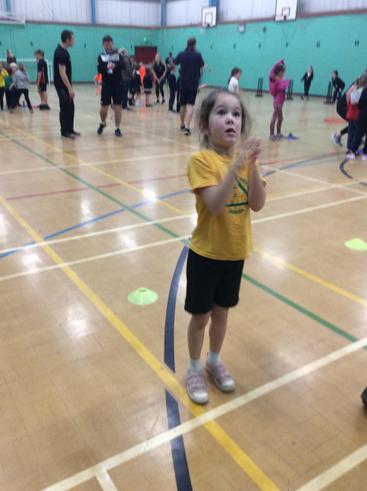 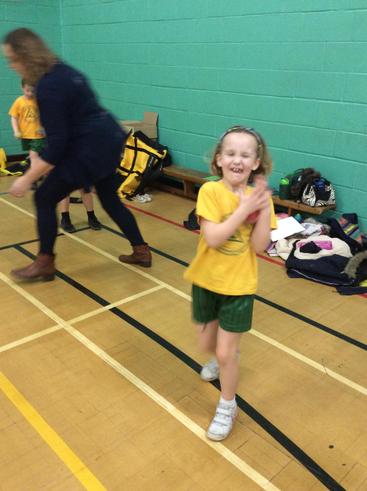 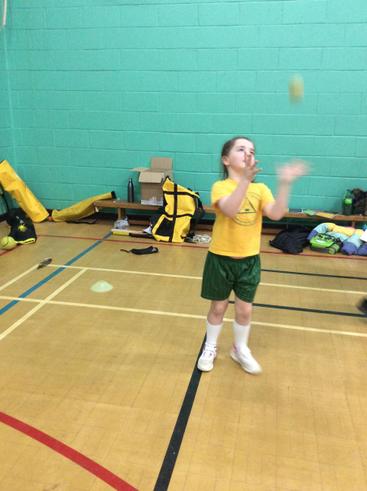 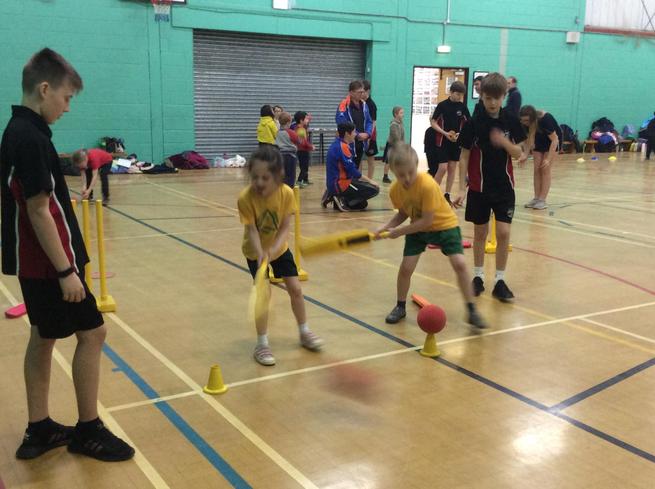 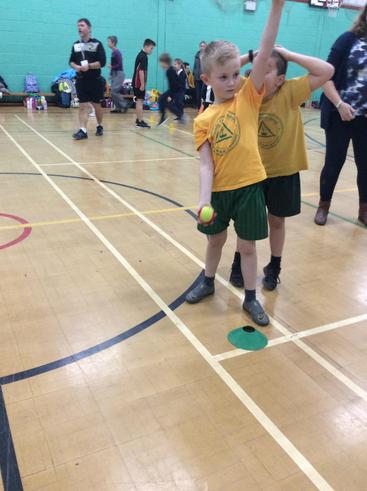 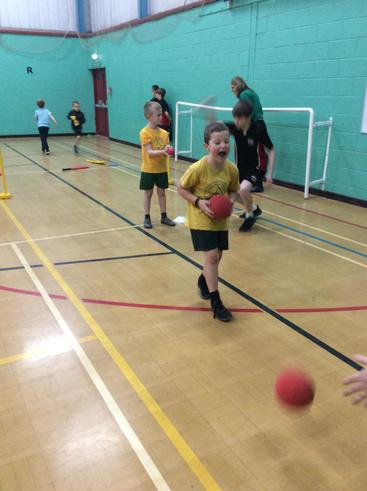 Together we inspire, through our Christian values, unique individuals who believe they can achieve more than they ever thought possible in mind, body and spirit. Through nurture and challenge, we provide a firm foundation to enable all to thrive, to lead and serve in their life long journey as local, national and global citizens.

Unfortunately not the ones with chocolate chips.

Some cookies are necessary in order to make this website function correctly. These are set by default and whilst you can block or delete them by changing your browser settings, some functionality such as being able to log in to the website will not work if you do this. The necessary cookies set on this website are as follows:

Cookies that are not necessary to make the website work, but which enable additional functionality, can also be set. By default these cookies are disabled, but you can choose to enable them below: